Turning on any television show based on small claims court a person is bound to hear some variant of that title, many times in a much less polite form. Sitting in a small claims court, or any civil court for that matter, a person is bound to hear some variant of that title phrase. Yet, in many representations of historical duels, those words are commonly found. Conflict seems to underscore our society and the phrase, “I’ll see you in court,” has almost seemed to reach the status of a common greeting. This could give someone cause to wonder that wouldn’t it be simpler and possibly more effective to just have the disputing parties put on gloves and go the proverbial twelve rounds rather than tie up the court with expensive and needless litigation. This lead this writer to the posting of the question, Should dueling (non-firearm) be legalized to replace some civil lawsuits?

END_OF_DOCUMENT_TOKEN_TO_BE_REPLACED 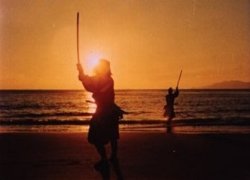 Musashi duels on the beach

Based on a true story, Samurai chronicles the transformation of a violent, headstrong youth (played by Toshiro Mifune) into one of history’s greatest swordsmen. Samurai won the Academy Award for best foreign film in 1955, and is regarded by many as Japan’s own Gone With the Wind.

END_OF_DOCUMENT_TOKEN_TO_BE_REPLACED

Few of us can match Miyamoto Musashi’s single-minded devotion to the pursuit of excellence in martial arts.

In fighting over sixty duels, many to the death, Musashi demonstrated great courage. And in winning every one, he showed superior skill and technique. Musashi attributed his outstanding swordsmanship to unrelenting practice of self-reliance and self-discipline.

In his final years, Musashi retired to a cave for a life of quiet contemplation. It was during this time that he composed his famous guide on strategy, The Book of Five Rings.

In his very last days, this Kensei (Saint of Swords) further distilled his insights on self-discipline and personal development into 21 points.