Derren traveled to a Bronnikov seminar in Belgium, accompanied a woman who has been legally blind for more than a decade. As for what happened next…I’ll let you watch the episode, which was broadcast in Britain but is now available on YouTube.

Darren Brown: After four days of attending courses in his method, I was anxious to meet the legendary founder, Vyacheslav Bronnikov. The superhuman figure revered by so many, who has reached the exalted heights of level 6, and even mentioned that he could levitate, and that we could too.

I began by asking him how he came up with the method.

Vyacheslav Bronnikov: Actually, my story…I had twelve teachers. I was absolutely loaded with knowledge. Overloaded maybe even, but in a very potent way.

DB: And you were how old?

VB: It started from three years old, but if I take the question more seriously, I came consciously into this body. That was my choice. I actually was aware about coming into this life before I was born. And when I was born, I had a lot of capacities already.

DB: We’ll talk about the ball of energy for a moment. When you do this [rubs hands together], you feel a tingle in your hands, and your muscles kind of create a sensation of pulling away. So I can understand how you can imagine that might feel like a ball. I don’t understand how you make the leap from an imaginary ball–a sensation in your fingers–to then placing that somewhere where other people can feel it, and touch it, and move it around.

VB: I guess you didn’t understand anything. When we wrap our hands between two parts of the brain, we create a connection. And this connection actually works. And transforms. And everything else is secondary. Individual. Everything works inside of the brain.

VB: Let your scientists organize an event. Let them organize a scientific commission. We’ll come, and it will work. And you will study from the very beginning, to the very end.

VB: Unfortunately, you create a negative documentary. You create problems for yourselves. You don’t have a scientific approach, and you don’t have basic knowledge of this technology.

VB: Do you understand what you are talking about? What do you want?

DB: I’m trying to understand. I suppose maybe I’m being naive, and if I am I apologize, but I guess I want to see a result.

VB: First of all, you create advertisements for your own…you show yourself not to be a serious organization. Will I be playing circus here, stacking boxes and things? This is not serious.

DB: You teach people to do this…

DB: You teach this at level 3.

VB: I am not playing anything with you. And I won’t prove anything to you.

DB: OK. So there is something called Charles Bonnet syndrome, which is where blind people can hallucinate, and think they are seeing things on the outside world, and it’s very convincing for them. Now do you think it would be unfair if blind people were being persuaded that it was actual vision when it was just a hallucination?

DB: When we think about self-improvement, then to me, becoming better people is about becoming…kinder…I think that is important. Do you think it’s kind to tell a 16-year-old boy with cerebral palsy that he will walk, and maybe develop superpowers?

VB: First of all, we’re not talking about healing, because we don’t heal. Maybe you frame information in the wrong way. I speak of a system of development. And ‘system of development’ means that if you stimulate the correct development of certain functions of the brain, you can…improve things. We normally want to work with normal, healthy people, who use the training techniques for self development. So I state again, we don’t deal with ill people. When we design a system for ill people, this is for use by doctors only.

DB: So the slogan, ‘World Without Blindness’, is that misleading to blind people? Should it be something else?

VB: It is working, and the results are there. Is that clear? I see that you are trying to find weak points. And I guess it’s fine, because you’re from England. But at Rostov-na-Danu–it’s a city in Russia–there is a boy, and he was born without his eyeballs. Nobody told him he was blind, and he can see better than you. Think about it.

DB: There’s a boy in Russia who has no eyes, and he can see perfectly? You’re saying that is true?

VB: Well, I don’t have this information. Just ask around, it’s in Rostov-na-Danu. And this is not the first case.

VB: From one point of view, I am happy that you in England have no understanding of new technology–scientific, psychological human development. And it’s very nice that Russia, Ukraine, and the Soviet Union are on the first wave of telepathy study.

DB: I just want to ask you one more thing, just going back to this [cardboard] box for a moment, because I want people at home to understand that, if it is not appropriate for you to do this–which is fine–I want to know why, so that they understand.

VB: You don’t deal with proofs, and usually create refutations, and this is your job, and you know where you belong. You do what you do. Let’s do the exposé. This will not work. Actually, for us, these types of shows are even better than real promotions. Make your documentary.

VB: Next time, we will participate in your circus. Don’t worry. 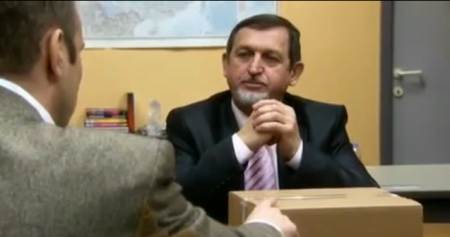 Based upon the contents of this show alone, it would be reasonable to conclude that Bronnikov was unnecessarily hostile, intransigent, and most likely a fraud. That is the conclusion I would have drawn after watching it, had I not once been in Darren Brown’s position myself.

The details of my story were just slightly different. I was not visiting Bronnikov, but instead a man with an even greater reputation. I was not a professional illusionist; but as an engineer who had already spent years studying the “Dao of Deceit” through the martial arts, I was nobody’s fool either.

Most importantly, I had no agenda other than to investigate the possibilities, and I was under no pressure to deliver a verdict within the span of a single week. For this and other reasons, I am well-qualified to provide some context, which is sorely lacking in Derren Brown’s presentation.