In 1970, a young martial arts instructor embarked upon an ambitious project. His goal: to teach America about the full potential of martial arts, as a vehicle for both physical betterment and spiritual evolution. His name: Bruce Lee. 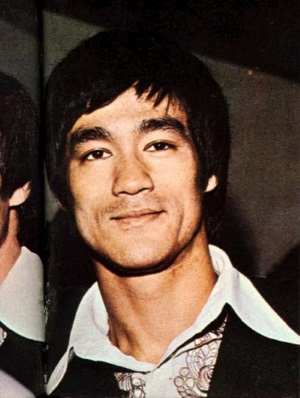 With the help of two students, actor James Coburn and screenwriter Stirling Silliphant, Lee wrote a script. This unprecedented project, tentatively titled The Silent Flute, would be the first Western movie about martial arts. Against the backdrop of personal combat, the movie would introduce its audience to Eastern concepts of self-mastery. Lee explained his approach in a forward to the script:

The story illustrates a great difference between Oriental and Western thinking. This average Westerner would be intrigued by someone’s ability to catch flies with chopsticks, and would probably say that has nothing to do with how good he is in combat. But the Oriental would realize that a man who has attained such complete mastery of an art reveals his presence of mind in every action. The state of wholeness and imperturbability demonstrated by the master indicated his mastery of self.

And so it is with martial arts. To the Westerner the finger jabs, the side kicks, the back fist, etc., are tools of destruction and violence which is, indeed, one of their functions. But the Oriental believes that the primary function of such tools is revealed when they are self-directed and destroy greed, fear, anger and folly.

Manipulative skill is not the Oriental’s goal. He is aiming his kicks and blows at himself and when successful, may even succeed in knocking himself out…

“Purposelessness,” “empty-mindedness” or “no art” are frequent terms used in the Orient to denote the ultimate achievement of a martial artist. According to Zen, the spirit is by nature formless and no “objects” are to be harbored in it…

True mastery transcends any particular art. It stems from mastery of oneself—the ability, developed through self-discipline, to be calm, fully aware, and completely in tune with oneself and the surroundings. Then, and only then, can a person know himself.

In The Silent Flute, James Coburn would play the role of Cord, a martial artist and seeker of truth. During his journey, Cord would encounter personifications of the obstacles to his enlightenment—form, ego, desire, and death—and ultimately triumph with the assistance of a realized master (to be played by Bruce Lee).

The Big Boss Changes His Mind

Lee and Coburn became frustrated with the project, and with each other, during its pre-production phase. Biographer Tom Bleecker recounts their scouting trip through India and Pakistan:

To begin with, Bruce had taken to giving kung fu demonstrations that would invariably gather large crowds. This bothered Coburn, whose privacy was shattered once he was recognized by the crowd who had congregated around Bruce…

In addition, Bruce had been in the habit of humming pop tunes under his breath and would often do this for hours while the three men were driving through the scorching desert. Finally, Coburn couldn’t take it anymore, and he spun around and shouted at Bruce who was sitting in the back seat, “For Christ’s sake, man, would you cut that out! You’re driving me crazy!” Bruce said nothing, but when Coburn turned back around, he shook his fist at the star’s back in the same manner as he had earlier done at McQueen’s house.

Late that evening the three men checked into a hotel. Bruce felt affronted because Coburn had been given star-preference by the hotel staff, which resulted in Coburn having a more luxurious room. Furious, Bruce went to Stirling to complain that he was supposed to be the star of The Silent Flute, not Coburn, further adding that one day he would be the biggest movie star in the world—bigger than Coburn, whom he now added to his “I’ll-show-you” list just below Steve McQueen!

Coburn dropped out of the project, and Warner Brothers followed. A short time later, Bruce returned to Hong Kong, where his performance in Raymond Chow’s Fist of Fury made him a star.

When Silliphant approached Lee afterwards with the intent of finishing The Silent Flute, Lee declined to participate, reportedly saying “You can’t afford me now.”

Bruce Lee died in 1973, sealing the fate of The Silent Flute. Even if he had lived, however, the film he originally envisioned would never have been made. His script called for subtitled dialogue in Thai, Cantonese, Arabic and Japanese, and featured explicit Tantric sex and extreme violence. In a relatively tame scene on page 9:

A second thug rushes Ah Sahm from the side. Instantly Ah Sahm releases his throat grip, pushes the first thug to his right even as he left side-kicks the rushing second thud in the groin. Before Ah Sahm’s left foot has retouched the earth, he has lept higher and kicked the already groggy first thug in the head, snapping his neck and dropping him lifeless to the ground. The second thug writhes on the ground, doubled in upon himself, his genitals destroyed.

The Circle of Iron: Safe for Peoria 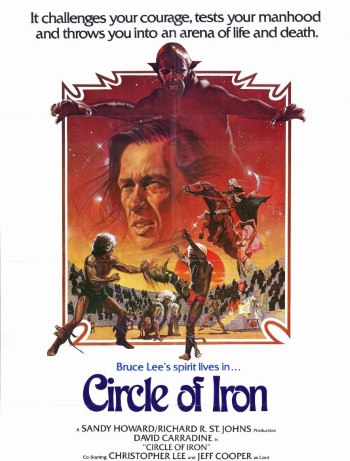 Five years later, Bruce Lee’s brainchild was resurrected. The X-rated script was sanitized and adapted by Stanley Mann, who added comic elements to leaven its otherwise austere tone. David Carradine stood in for Lee as the blind teacher Ah Sahm. The Master Yamaguchi character was renamed as Zetan, and the Thailand setting was removed in favor of a fantasy world. Finally, the entire movie was retitled, as the meaningless but imposing Circle of Iron.

Circle of Iron is now available on DVD. The fight choreography is bad, and Jeff Cooper’s acting in the lead role of Cord is worse. Much of its humor is unintentional. Nevertheless, I can recommend it as a fascinating look into Bruce Lee’s philosophy of martial arts.

Have you seen Circle of Iron? Please share a review of your own.