The first Cultural Revolution has ended, but wushu now faces a new peril. This second revolution transcends national boundaries, and there is little hope of escaping its reach.

Technological innovations have spawned an era of online collectivism. The wiki assimilates individual voices and personalities; the search engine eliminates context and perspective. Mash-ups and remixes are splitting the atoms of human expression.

Does this collectivist revolution truly empower the working class? Superficially, yes. We no longer have our facts dictated to us by Encyclopedia Britannica, and the Old White Men who maintain it. Now, we are all free to make up our own facts, and publish them in Wikipedia.

This cyber-Maoist ideology, like its predecessor, weakens the current ruling class only to replace it with another. Old media authors and their publishers are replaced with aggregators and social-networking elites. On the phenomenon and its detrimental effects, Jaron Lanier writes:

Compounding the problem is that new business models for people who think and write have not appeared as quickly as we all hoped. Newspapers, for instance, are on the whole facing a grim decline as the Internet takes over the feeding of curious eyes that hover over morning coffee and even worse, classified ads. In the new environment, Google News is for the moment better funded and enjoys a more secure future than most of the rather small number of fine reporters around the world who ultimately create most of its content. The aggregator is richer than the aggregated.

The artificial elevation of all things Meta is not confined to online culture. It is having a profound influence on how decisions are made in America…What we are witnessing today is the alarming rise of the fallacy of the infallible collective.

I’ve participated in a number of elite, well-paid wikis and Meta-surveys lately and have had a chance to observe the results. I have even been part of a wiki about wikis. What I’ve seen is a loss of insight and subtlety, a disregard for the nuances of considered opinions, and an increased tendency to enshrine the official or normative beliefs of an organization.

Collectivism stimulates a regression to the mean. Forty years ago, Mao ruthlessly flattened Chinese society by persecuting the educated bourgeoisie; this second revolution is bloodlessly enforced with technological measures.

What does all this have to do with wushu? Recall the literal meaning of kungfu: it is not “martial arts”, but “the results of hard work over time”. Kungfu is extraordinary skill and understanding, it is entirely above the mean, and the averaging functions of online collectivism can only dilute it. Kungfu is not the product of a committee.

The Cult of the Amateur 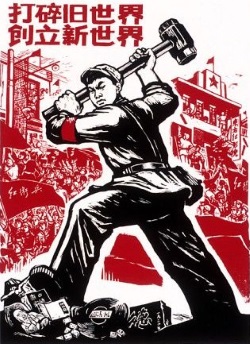 The destruction of harmful old customs, old culture, old habits and old ideas was a stated goal of the first Cultural Revolution. Even if we accept this goal at face value—rather than as a pretext for consolidation of political power—it was clearly guaranteed to fail.

Who was qualified to separate fact from superstitious belief? Science and engineering disciplines reject decision by consensus, relying instead on education and experimentation. Those most qualified to undertake the task, however, had already been vilified by Mao’s regime as elitist counter-revolutionaries. The Red Guard took matters into its own hands, performing ignorant and indiscriminate acts of violence: burning books, smashing antique artwork, and tearing down thousands of temples.

This same mentality can be readily observed in Internet martial arts forums and blogs. Overzealous amateurs, posing as skeptics and debunkers, rail against any demonstration or discussion of kungfu that exceeds their own ability and experience. Today, it is dim mak, empty force, and chi kung; tommorow, fang song and the inch punch?

Ironically, the information superhighway is a breeding ground for such careless anti-intellectualism. No-cost publishing services provided by MySpace, Facebook, Blogger, and other websites encourage Generations X and Y to indulge their record-high levels of narcissism: talking without listening, teaching before learning, and stoking their egos while pretending to perform a public service.

In online communities, many of the natural checks against destructive and anti-social behavior are absent. Anonymity and invisibility foster a willingness to shoot from the hip, to play fast and loose without fear of consequences. Members of the jianghu world of martial arts, in contrast, were expected to demonstrate the courage of their convictions in person, accepting challenge matches to prove any questionable claims.

In place of trial by fire, the online wushu community increasingly relies on proof by repeated assertion. Online disinhibition serves as another averaging function that, at its worst, suppresses excellence and elevates the commonplace.