Sadly, kinesthesia is not a part of many modern people’s vocabulary. The sense of movement is the only way to experience first-hand the relationship between space and time. It gives you the direct experience of life. Many people only experience life through their visual and/or auditory senses. This externalizes their experience…they just observe life happen instead of participating in it.

The signature element of Qi Dao as a qigong style is its emphasis on physicality, unadulterated by the choreography of strictly defined forms. Just as Jesus Christ was no Christian and Shakyamuni was not a Buddhist, Lama Tantrapa teaches that we should not expect to attain self-realization by staring at the ground and tracing another person’s footsteps.

The Qi Dao curriculum has been strongly influenced by various martial arts, and practice with an “adventure partner” is encouraged. Partner exercises in the book explore the use of the complimentary forces (up and down, forward and backward, opening and closing) to harmonize with incoming energy expressed as grabs, knees and elbow strikes.

Video from the accompanying DVD

Although Qi Dao is said to be rooted in the traditions of Tibetan Bon shamanism, the sections dedicated to stretching and martial applications resemble equal parts Indian Yoga, Chinese Qigong and Japanese Aikido. These two sections comprise one-third of Being in the Flow.

Experienced martial artists will agree with many of the movement principles expressed here, but may object to the particulars of some illustrated applications—and to Lama Tantrapa’s ubiquitous references to the dream-like nature of existence. 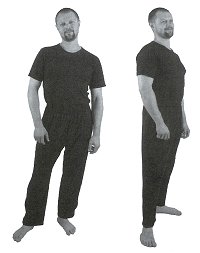 The most fascinating part of Being in the Flow is its discussion of holding patterns. These habits of chronic tension inhibit the healthy flow of qi, limit the natural range of motion, and create pain and discomfort.

From a very young age, your bodily movements naturally played an essential role in your emotional life as somatic (physical) expressions of your feelings and emotions…As you were growing up and developing your unique personality, you were also developing your particular way of holding yourself.

Self-undermining patterns—categorized here as Holding Forth, Holding Back, Holding In and Holding Out—are reconciled through the Qi Dao practice of somatic awareness. This awareness, rather than direct manipulation of energy, is the primary focus of the book.

Taking into consideration that people have a tendency to create rigid identities out of their habitual states, Qi Dao teaches to transcend attachment to the old sense of self expressed through holding patterns. It is not really your holding patterns that you are working on—it is your sense of identity attached to the states of consciousness manifesting as your patterns of holding tension that you are learning to surrender.

You won’t find a laundry list of chi orbits, locks and other esoterica in The Art of Being in the Flow, and that is a good thing. Lama Tantrapa uses clear language and entertaining imagery to describe how Qi Dao can help you develop a harmonious mind, body and spirit; his explanations apply to other high-level martial arts as well. If you enjoy reading Martial Development, then you will also appreciate this book.