First and foremost, a master of Karate must become a master of the obvious. While mid-level belts are distracted by the novelty of obscure or secret kata applications, the expert must constantly return to his or her fundamentals.

Wilt Chamberlain is an intriguing example of this approach. Decades after his retirement from the NBA, he still dominates the record books. Wilt took the most shots, and scored the most points of any player in the league. (He was also very successful on the basketball court.) 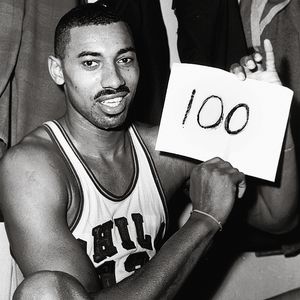 Yes, Wilt Chamberlain was clearly a gifted athlete; but there is another important contributing factor to his success.  Did you know he used a free throw kata?

It’s true. Not only that, but he remained loyal to this practice, despite clear evidence that his kata did not work.

There is a lesson here for every teacher and student of Karate. It’s a lesson about deep fundamentals.

First, though, let’s review the story of Wilt Chamberlain’s free throw kata, as told by Malcolm Gladwell on This American Life:

For sheer physical presence, there has probably never been anyone like Wilt. There are lots of seven footers who play basketball, who are basically on the court purely because they’re seven feet tall. They’re clumsy and ungainly.

Chamberlain was not like that. He was as big as an oak tree and as graceful as a ballet dancer. That season, 1961 to 1962, he ended up averaging more than 50 points a game. That record will never be broken…

March 2nd, Wilt was hungover. He’d been out all night with a woman he picked up at a bar. That’s classic Wilt, too.

He would later claim to have slept with 20,000 women in his life. And when he said that, lots of people did the math and said, there was no way that was possible, given the fact that there are only 24 hours in a day, and Wilt only lived to the age of 63. But even the skeptics were like, well, maybe it’s 10,000 or 8,000. It was an argument over whether it was an unbelievably high number, or merely an incredibly high number.

So back to the game in question. Chamberlain makes his first five shots and has 23 points at the end of the first quarter. At halftime, he has 41 points. No one’s thinking history just yet. But then, by the end of the third quarter, he has 69 points. And he keeps going and going and going….

100 points, the most anyone has ever scored in a professional basketball game. And here is the most incredible thing about it– he shot brilliantly from the foul line, made 87.5% of his shots. The reason that’s incredible is that Chamberlain was a horrendous free throw shooter, the worst.

He was a man who could score at will with two and sometimes three defenders draped all over his body. But put him all alone, 15 feet from the basket, and he was hopeless. There were seasons in his career where he shot 40% from the free throw line. That’s terrible.

But this season, Chamberlain changes tactics. He starts to shoot his foul shots underhanded. He doesn’t release the ball up by his forehead. He holds the ball between his knees and flicks it towards the basket from a slight crouch. Some people call that a granny shot. And all of a sudden, he’s a pretty good free throw shooter.

He makes 28 free throws, the most anyone has ever made in a regular season game in NBA history. He made 28 out of 30.

Take a moment here to imagine yourself in Wilt Chamberlain’s giant shoes.

Imagine you are the highest scorer in NBA history. Imagine you’ve just learned how to increase your free throw percentage from a miserable 40 percent, to nearly 90% success–just by replacing one basic sequence of movement (kata) with another. What are you going to do next?

Well, here is what Chamberlain actually did:

Wilt Chamberlain stops shooting underhanded. And what happens? He goes back to being a terrible foul shooter.

Let’s think about what he did for a moment. Chamberlain had a problem. He tested out a possible solution.

The solution worked. And all of a sudden, he’s fixed his biggest weakness as a player. This is not a trivial matter.

You know what Chamberlain’s coach said to him about his free throws? “If you were a 90% shooter, we might never lose.”

Chamberlain had every incentive in the world to keep shooting free throws underhanded, and he didn’t.

In his autobiography…Chamberlain wrote– “I felt silly, like a sissy, shooting underhanded. I know I was wrong. I know some of the best foul shooters in history shot that way. Even now, the best one in the NBA, Rick Barry, shoots underhanded. I just couldn’t do it.”

Malcolm Gladwell believes this is a story about irrationality, peer pressure versus perfectionism, and the Threshold Model of Collective Behavior. Go ahead and listen to the entire podcast. He is a convincing storyteller.

Chamberlain returned to his overhand free throw kata, even as he knew that by doing so, he would lose points for himself and for his team. Why? Because he wanted to look manly. Which is a completely rational decision, for someone who enjoys sleeping with 2 or 3 different women every day of the week, and prioritizes that above certain aspects of his basketball game.

All of this applies to your own Karate practice.  Consider the sequence of movements in Heian Shodan, for example…

Add your own kata questions, answers and secrets below.