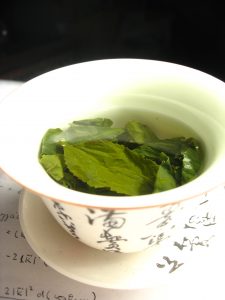 Through the kitchen window, I watched the staff.  They were on break again.  Sitting outside, smoking cigarettes, and watching soap operas on a portable television.  I could not imagine why a small mountain temple needed three employees in the kitchen, but I knew better than to ask.  Just another ancient mystery to contemplate, as I prepared a fresh pot of Oolong.

Ten minutes later, the tea was ready.  For the seventh time that afternoon, I filled the Zen master’s teapot. I rinsed the ceremonial cup, and placed it on the ceremonial tray, following his instructions precisely.

As I carried the tea set back to the old monk, I gazed at the faded murals in the hallway.  A travel brochure had claimed they were historical record.  To me, the number of dragons seemed rather suspicious.

Even as I contemplated those figures on the wall, I realized they were only a distraction from my assigned task.  Or perhaps the task itself was a distraction?  I continued walking.  Does anyone really need eight pots of tea in a day?

I entered the great meditation hall once again, approaching the old monk on his pillow.  Suddenly my wet loafers slipped on the stone floor.  The ceremonial tea set flew from my hands, and shattered into a hundred pieces.

I was not particularly bothered.  Calmly, I picked myself up off the ground, while the monk sat expressionless ten feet away.  We watched the liquid flow into a puddle, between the stones and shards.

I stomped on the puddle until it disappeared.  Tea service was over.

“It’s a metaphor,” I explained.

As I turned to leave the monastery, the old monk raised his arm.  He gazed for a moment at the fresh mess in the hall.  Then he smiled and stated simply: “No refunds.”