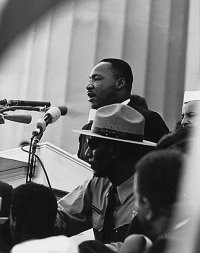 Your blog confers a measure of authority, influence, and social capital. How do you choose to spend it?

Building a loyal audience is simple: just tell the people what they want to hear. Following the crowd is the safest route to fame and wealth; but would do you dare to endorse an inconvenient truth?

Martin Luther King dreamt of a nation whose citizens would be judged not by the color of their skin, but by the content of their character—and he worked tirelessly to achieve that dream.

On April 3, 1968, the day before an assassin’s bullet ended his life, Martin Luther King expressed his willingness to die for the causes of freedom and equality. King acknowledged his inescapable mortality, the necessity of sacrifice, and the choices he faced: to die for nothing, or for something. For what cause are you willing to sacrifice?

What kind of extremist are you?