Before The Matrix ignited our current wuxia craze, with its improbable spinning kicks and high-precision fisticuffs, how did our heroes show their combat prowess? Primarily, as I recall, with a bullet-deflecting aura, flawless aim, and a bottomless clip.

In other words, these earlier fights were conducted with magical talismans, and not any representative of actual firearms. Imagine Harry Potter with a five o’clock shadow, versus an army of cross-eyed dragons that can’t shoot straight. In whose eyes were these gun battles any more realistic, or exciting, than (even formulaic and poorly choreographed) hand-to-hand combat? Within which paradigm it easiest for us to suspend disbelief, or to empathize?

America has always been uncomfortable with self-cultivation myths. The power of the cowboy, our original American superhero, flowed through his sidearm–and we are apparently meant to imagine he cast it himself, along with all the ammunition; but in contrast to legendary Eastern kung fu masters, our storied independence was always a product of the general store. 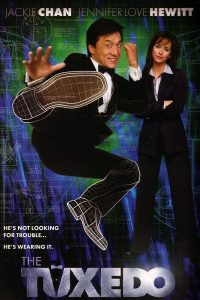 Superstar Jackie Chan, for example, is a real-life product of long and bitter kung fu training, and in the films that built his career, many of his characters share a similar background. Whereas, when courting an American audience, his movie plots too often concern a cybernetic tuxedo, or a magical medallion. (If you’ve seen either of these, then you know that twice is already too often.)

Fortunately for martial arts fans, not all on-screen violence is mediated by technology. While today’s hand-to-hand combat can be frantic, yet implausibly sterile, some scenes from decades past are unintentionally hilarious. Star Trek is a prime example, illustrating that there never was a greatest generation, or a golden age for violent action.

So what are the crucial truths about fighting and martial arts that popular movies obscure? First, that there is any difference at all between fighting and martial arts. Second, that there is a difference between fighting for dominance, and fighting for survival; even when lives are at stake, action movie heroes are more concerned with displays of personal heroism (no surprise here), and less with pragmatism or efficiency. Third, that a “successful” overt action is, at best, a rectification of previous failures at covert influence…

How are martial arts and the entertainment industry influencing each other? Is either improving, or corrupting the other? What do you think?