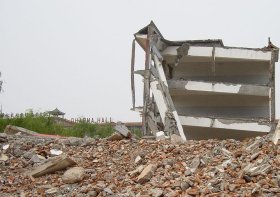 Outside the Wushu Institute at Tagou

Some old training partners tipped me off to the crime.  They recently visited the temple during a sightseeing trip through Henan province, and were shocked at what they found.  The monastery itself was cleaner than ever before—a veritable Chinese Disneyland—but dozens of buildings in the surrounding area had been reduced to piles of rubble.  Homes and businesses were demolished, their owners scattered.

Only the Chinese government would have the means to destroy the Shaolin village, I reasoned.  Similar acts have occurred in the United States: the eminent domain principle has been applied to justify the confiscation of land for highways, even condos and shopping malls.

But why should the government take a sudden, disruptive interest in the lives of the villagers, and expel thousands of students from neighboring kung fu schools?  I could not imagine Dengfeng County officials voluntarily shrinking their tax base; in both the East and West, government’s first goal seems to be self-preservation.

Circumstances suggested the influence of an outsider, one with an interest in the temple’s commercial success.  With the eviction of all competing businesses, the temple would possess a profitable monopoly.  This upheaval must have been the design of a Shaolin bureaucrat.

My chief suspect had assumed power just a few months earlier, and after reviewing the evidence, I considered this mystery solved.  But before closing the case, I had to deal with a few confounding loose ends.

According to official reports, Shaolin village was expropriated so that the monastery could be preserved for future generations.  The pressure from endless hordes of kung fu students and tour groups threatened to ruin it, you see.  The argument was persuasive.

Truthfully, the village was a poster child for growth management.  Children with sabers and rope darts occupied literally every flat surface in town.  On hot days, the stench of sewage and burning trash filled the air, a visceral reminder of overpopulation.

You might expect this bustling atmosphere to be the normal state of affairs, at this Mecca of Chinese martial arts.  However, as I continued my investigation, I was shocked to learn that Shaolin had not always been a destination for wushu instruction.

Believe it or not, the Shaolin Temple was built for the practice of Buddhism.  Its greatest master was famous not for his pugilism, but for nine years of uninterrupted sitting meditation.  His disciple, Huike, cut off his own arm to receive the Chan teachings; clearly Huike wasn’t a great two-fisted boxer either.  Apparently, the Wu-Tang Clan is a pack of liars!

How did the temple became so strongly associated with martial arts, in the minds of the public?  I held little hope of finding the truth in a history book.  Those of you familiar with martial arts history know that these accounts are largely unreliable; every generation of teachers seems to make a few adjustments to the records, for their own benefit.

All my leads had run dry, and I was ready to give up.  Then I stumbled upon a typewritten confession from one of the masterminds behind the plot. 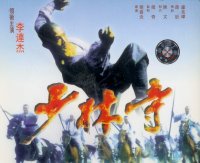 In 1979, the young wushu forms champion Li Lianjie accepted his first starring role in the movie Shaolin Temple.  The movie was filmed on-location.  As Jet Li himself remembers,

When we arrived in the area in 1979 to start filming the first movie, the temple and the grounds were very dilapidated. The Cultural Revolution had only ended a few years before. There was nothing left inside, and the exterior of the buildings hadn’t been kept in very good order either. There were only three monks living at the temple. One was the abbot, one the gatekeeper, and the last one was the caretaker/cook. As far as we knew, none of them had any particular martial prowess and nobody in the area practiced wushu.

After the movie came out, though, the temple gained fame throughout China and the world. By the time we returned three years later for more filming, the place had changed completely. All the roads within a four or five kilometer radius of the temple were lined with signs promoting Shaolin businesses of all kinds: Shaolin cola, Shaolin beer, Shaolin cigarettes…and school after school of Shaolin martial arts.

Millions of tourists are now flocking to the Songshan monastery every year.  If there is one person responsible for ending its quiet serenity, wouldn’t it be Jet Li?  His work of historical fiction inspired the visitors, who financed the local government, who engineered the reclamation of the village.

Actually, I have reason to believe that the real mastermind is still at large: the man who transformed this sleepy mountain retreat into an international symbol, knowing the implications of such fame.  If not for his work, few people outside of Dengfeng would know of, or care about the Shaolin Temple. 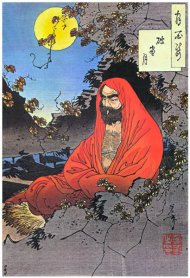 Damo at his mountain cave hideout

The suspect is Damo.  This blue-eyed barbarian is also known by the aliases Daruma and Bodhidharma, but within his Chan gang, he uses the secretive title “First Patriarch”.

The suspect was last seen entering nirvana, and is wanted for conspiracy to enlighten others.  If you have any information on current whereabouts of Damo, please contact the authorities so that I may finally close this case.