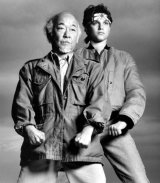 It’s been twenty years since its release, so The Karate Kid is officially cool again. The indie rock band No More Kings has drafted the movie’s original cast members into its latest music video.

Thanks to The Temple of Meg-fu for sharing the link.