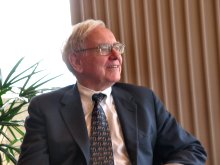 Martial Development: More than you realize. For example, you have frequently advised fellow investors to master their greedy and fearful emotions. This is also a requirement for high-level kung fu.

If you would prefer to avoid the more hostile elements of martial training, and talk about the noble art of self-defense…

Warren Buffett: Certainly, I would.

Martial Development: No problem. I’d like to pick your brain regarding the self-defense value of MMA.

“I prefer to keep all my eggs in one basket and watch that basket closely.”

Martial Development: Mixed martial arts, actually. It’s become quite popular over the last decade. Since you seem unfamiliar with MMA, I’ll try to describe it using an investment analogy.

Traditional martial arts usually specialize in one style of attack. For example, Karate is focused on delivering punches and kicks, whereas Jujutsu uses grappling and throwing techniques. Training in these traditional styles is like buying stock in a single company, if you will.

Martial Development: Precisely. Now, the vast majority of investment advisors recommend diversified asset allocation, yet you speak against it. Why?

Warren Buffett: Diversification is a protection against ignorance. It makes very little sense for those who know what they’re doing.*

Martial Development: Well, you seem to know what you’re doing. Your fifty-year career gives the lie to the “efficient market hypothesis”, wherein the market reflects the true value of every investment. Do you suppose that the value of traditional martial arts training is underappreciated today?

Warren Buffett: For some reason, people take their cues from price action rather than from values. What doesn’t work is when you start doing things that you don’t understand, or because they worked last week for somebody else.*

Martial Development: Interesting. Some people have written online, however, that the UFC proves…

Martial Development: Um, right. So, is it fair to say that you disagree with the old adage, “Don’t put all your eggs in one basket?”

Warren Buffett:I prefer to keep all my eggs in one basket and watch that basket closely.*

Martial Development: But following that advice, how could a traditional kung fu artist possibly deal with all the different types of attacks they might face on the street?

Warren Buffett: You only have to do a very few things right in your life, so long as you don’t do too many things wrong.*

Do you have a self-defense question for the Oracle of Omaha? Ask below.