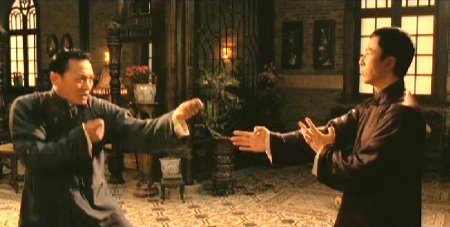 Grandmaster Ip Man—the man who ushered Wing Chun kung fu out of obscurity, and presided over the instruction of a young Bruce Lee—is the subject of a exciting new Hong Kong biopic. Action star Donnie Yen portrays the petite but powerful Ip in early adulthood, as wealthy playboy and martial arts fanatic.

Thanks to the influence of Ip Man and his disciples, Wing Chun is one of the world’s most widely practiced Chinese martial arts today. Its sparse representation in kung fu cinema might be attributed to its preference for short, straight, and simple movements. The obscure but photogenic style of “drunken boxing”, by contrast, can be found in dozens of movies, comic books and video games.

My current list of Wing Chun movies worth watching:

Rumors state that quality footage of the real-life Ip Man still exists, in the private collection of Wing Tsun instructor Leung Ting. He declines to share it.

Update: The USA edition of Ip Man has been officially released to DVD. Ip Man 2 is also currently available on all-region DVD from YesAsia.