Acupoint striking techniques where originally developed in the Orient. Historical documentation suggests the martial uses of acupoints were first discovered about fourteen hundred years ago in feudal China. Over the centuries, these techniques have been incorporated into several Asian martial arts systems. Under traditional training methods, these types of “internal” techniques were only given to a student once he or she reached a certain level of proficiency, discipline and standing within the system. As such, the body of techniques often referred today by the Chinese term “Dim Mak,” were traditionally taught only to the most senior ranks of students. It was hoped that once a student had attained the proficiency level and discipline necessary to learn the techniques, he or she should never have to use them.

But what exactly is an “acupoint”? Contemporary studies have led to two schools of thought. The first is based on the “Eastern” model of Traditional Chinese Medicine (TCM) and Chi disruption. The second is based on western medical theory and human anatomy.

Acupoints conduct [electrical] current better than other areas of the body. This has been clinically proven on test subjects, as well as cadavers.

The TCM model embraces the concept of “internal energy” (called “Chi”) circulating throughout the body along channels, which the ancient Chinese termed “meridians” and “collaterals.” TCM holds Chi as being dissimilar to nerves, blood and other “observable” biological systems within the body. Rather, Chi permeates and utilizes them collectively. Within this intricate system, twelve primary meridians and two primary collaterals connect the internal organs with the rest of the human body. The areas we refer to as pressure points lie along these meridian and collateral channels. Many of these points are bi-polar, appearing on both sides of the body midline (e.g., both arms, legs, etc.) They are distributed from the top of the head to the bottom of the feet. The Chinese characters for acupoint describe them as “gate-ways” or “openings” where Chi can be accessed and influenced. In TCM, each of the classic points has a Chinese name, which in some way describes the function, location and character of the acupoint. In modern literature, acupoints have been given a simpler alphanumeric code.

Within the TCM model, strikes to classical acupoint locations disrupt the normal flow of Chi through the meridian / collateral system. This disruption of Chi causes a physiological reaction within the body. The difficulty with the TCM model, though, is Chi continues to be an unproven phenomena by Western medical standards. Since the 1970’s, a considerable amount of research has been conducted in an attempt to prove the existence of Chi. This has included dissection of tissue, as well as clinical tests using sensitive medical equipment. In recent years, there have been a significant number of well-regarded studies that have produced interesting findings favorable to TCM theory. Still, the TCM model lacks sufficient empirical data to conclusively prove Chi’s existence and role in acupoint strikes.

Western Medical Theory (WMT) has also proposed a biological explanation for acupoints, and how they work. Most of these findings originated from broader clinical studies intended to determine the medical benefits of acupuncture. The most popular WMT theory centers on nerve or circulatory facilitation to explain why acupoints (and the more broadly defined “pressure points”) work. Within this model, “pressure points” are places to enter energy into a nerve. When an individual strikes an acupoint, he or she is sending an electrical charge down the meridian. Supporters of this neurological model theorize that pressure points are directly linked with the central nervous system of the body. Specifically, the neurological model holds that pressure points exist where (i) a nerve ends, (ii) two nerve fibers cross, or (iii) one nerve fiber branches into a “y.”

Using sophisticated research equipment, the biological structure of acupoints has been explored in clinical trials and dissections. The anatomical make-up of the points has been found to be characteristically rich in certain types of cellular structures, including free nerve endings and mast cells. In addition, it has been determined that many acupoints lie directly over proprioceptors; particularly in the areas of the knees and elbows. Further, acupoints demonstrate high electrical conductivity, which distinguishes it from surrounding skin. Dissection of the acupoint tissue areas have produced some, though not complete, correlation. This research has also brought to light some differences, too. While fairly uniform in diameter (about 2mm), clinical trials have shown that acupoints range from 0.5 cm to 8 cm below the skin, dependent on their location. Acupoint cellular anatomy reveals a multi-layered, interconnecting network of fibers and body tissue, which are not always uniform of consistent from point to point. But amid these differences, certain regularities exist too:

(A) Electrically, acupoints conduct current better than other areas of the body. This conductivity is fairly uniform and consistent, and has been clinically proven on test subjects, as well as cadavers. These tests suggest a uniform cellular quality exist in pressure points.

(B) Chemically, there are measurable differences in sodium and potassium in acupoint cells, as compared to surrounding tissue. It is thought these higher levels contribute to the conductivity of the cell areas.

(C) Histologically, there are some specific cellular structures common to acupoints, which appear in patterns different from surrounding tissue. These include high concentration of capillaries, mast cells, lymphatic drainage, and sensory afferent nerves.

(D) Anatomically, almost all acupoints lie along folds in tissue groups and connective fibers. Of interest, in the area of the human body with the highest concentration of nerve fibers (the posterior gluteus maximus), there are the fewest acupoints.

Without question, there is a considerable amount of credible scientific work to support the existence of acupoints. But the exact nature of the points and their ability to effect the body continues to remain a bit of an enigma. To date, no model has been proposed which satisfactorily explains all facets of these elusive regions. Still, new studies continue to pioneer and build on what we know about acupoints, and why strikes to the points are so effective. Continually, these studies produce new findings which challenge what we know, and spark our creativity to find certain answers. Collectively, it continues to expand our knowledge of the martial arts and medicine. 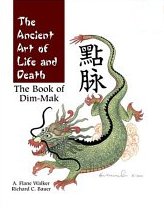 A Primer on Pressure Points was written by Rick Bauer, co-author of The Ancient Art of Life and Death: The Book of Dim-Mak.