No martial arts training should be required to appreciate these points, which can be derived from basic human empathy. The worst Karate move I ever learned, however, flagrantly disregards both of them. Before examining that inferior technique—and a superior alternative—let’s briefly consider the context in which it is taught.

Whether or not you consider Karate an effective means of physical self-defense, rest assured that most serious Karate students believe in its potential. Nevertheless, Karate authority Gichin Funakoshi insisted that the art should be used defensively, and only then in the gravest circumstances. “There is no first strike in Karate,” and one should “never be easily drawn into a fight,” he famously said. 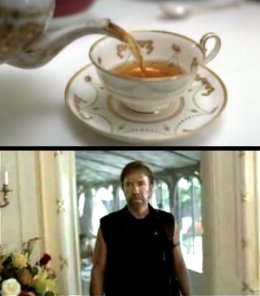 Extracted from their original context, these statements have a strange and detrimental effect on the average American Karate student. They seem to foster a quixotic illusion of knight-errantry: “My Karate is deadly, but fortunately for you, I am too courteous to use it.”

It is when this chivalrous fantasy overpowers a Karateka’s innate sense of empathy, that they are most likely to attempt the worst Karate move ever: uttering the suicidal phrase “I don’t want to fight you.”

To the self-absorbed martial artist, saying “I don’t want to fight” represents the epitome of Bushido virtue. It is meant to be heard as “I don’t want to beat you up, but know that I can, and I will unless you back down immediately.”

Disregard that intention, honorable though it may be. What does this statement actually communicate to the potential attacker? Let’s consider it in light of the two self-defense points above:

More direct phrasings, such as “I know Karate,” are hardly any better, for the same reasons. Reciting tough-guy dialogue from Hollywood movies is worse. (I once had a martial arts instructor warn me, after I proposed to knock him over: “I wouldn’t recommend that.”)

Empathy is a Self-Defense Skill

In such circumstances, I would recommend appealing to the potential attacker’s sense of self-interest, rather than your own sense of self-righteousness. The message that embodies this strategy is not “I don’t want to fight with you,” but “You don’t want to fight with me.” It is most effective when delivered non-verbally, and most easily communicated when it is actually true.

There are legal implications to be considered with such a strategy, to be sure. It requires unusual finesse to employ sen sen no sen in the presence of witnesses, without appearing to be the aggressor; even more when executed without physical contact.

Know your limits. And if such an attempt should fail: remember that you don’t need to win the fight, only to avoid losing it.