The roars and howls emanating from the property of a man who kept a menagerie of wolves, tigers and bears had many of his neighbors fed up even before one of the bears attacked and killed its 24-year-old caretaker.

“It’s a pain in the neck,” said Tom Burrington, 68, a retiree who lives two doors down. “There are coyotes hollering at night, lions roaring at night, junkyard dogs barking all day.”

A bear attacked caretaker Brent Kandra on Thursday evening after being taken out of its cage for a routine feeding, Lorain County Sheriff’s Capt. James Drozdowski said. Owner Sam Mazzola, who years ago earned the wrath of animal rights activists for letting people wrestle one of his bears, used a fire extinguisher to force the beast back into its cage… [continued] 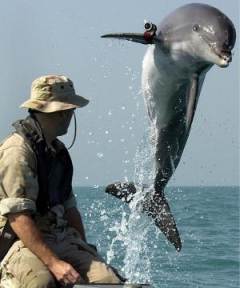 We saw our first dolphin in the garage. Bunsen was lying belly-down on a tarp, where trainers stroked his flesh to keep him calm. The 11-year-old bottlenose dolphin had diarrhea, and physical exams hadn’t been able to detect the cause. So Bunsen the dolphin was getting an ultrasound.

One veterinarian watched on a beeping screen as another scanned Bunsen’s abdomen. A trainer cooed and slipped the cetacean a mackerel while keeping him moist with squirts from a plastic water bottle.

But this wasn’t some ordinary carport. And Bunsen is no ordinary sea creature. This was the alcove of a military operating theater. And Bunsen is a foot soldier in the Pentagon’s global War on Terror.

We’d come to this military outpost in San Diego because this is where the U.S. Navy trains marine mammals to stop invaders… [continued] 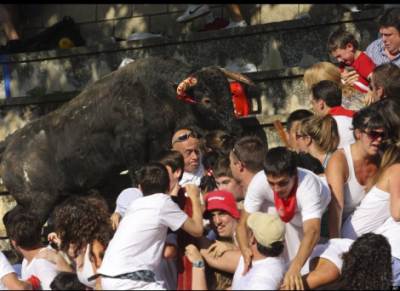 A bull leapt into the packed grandstands of a Spanish bullring and ran amok, charging and trampling spectators and leaving 40 people injured, regional officials said.

Video showed the bull jumping several yards high out of the ring, clearing two barriers before landing in the stands and raising a panic as he lurched through the screaming crowd, charging and tossing everything he could… [continued]