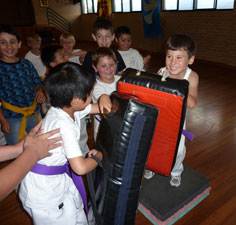 Many martial arts schools teach children as a sidelight to their main focus: adults. They are not that interested in children, and only do it because it represents a sizable chunk of their school’s income. Children are routinely thrown into adults classes or treated as “miniature adults.” A school that can focus on the needs of children will be very successful, as there are few that get it right. To be a successful martial arts school for children, it is important to recognize how teaching them differs from the teaching of adults.

END_OF_DOCUMENT_TOKEN_TO_BE_REPLACED

In this excerpt from the intriguing documentary Mind, Body and Kick-Ass Moves, a Japanese martial arts expert uses the power of his kiai to ring a heavy temple bell.