Three Kingdoms: Resurrection of the Dragon

[Amazon] [IMDB] [Netflix]
Starring Andy Lau, Maggie Q and Sammo Hung
Romance of the Three Kingdoms, written more than 500 years ago, has long been one of China’s most treasured novels. Andy Lau’s film is the first of two released this year, to be based on this classic work of historical fiction. Although short on the individual fight action scenes that identify the typical “martial arts movie”, it is nevertheless an entertaining work.

The second Three Kingdoms movie, John Woo’s Battle of Red Cliff, will be released as a two-part epic. The first two-hour section is available now, and the last is scheduled for January 2009.
My ratings: B+ for Three Kingdoms and Red Cliff

[Amazon] [IMDB] [Netflix]
Starring Chiwetel Ejiofor and Tim Allen
I am not usually a fan of American martial arts dramas, with their second-rate fight choreography (in comparison to Hong Kong) and shallow moral lecturing. Redbelt was a pleasant surprise. David Mamet shuns most of the Miyagi-style stereotypes, and delivers a moving, suspenseful story with three-dimensional human beings.
My rating: A-

More of the Best…

Some of the Rest… 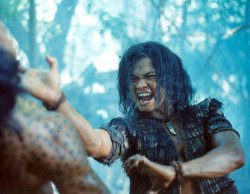 These martial arts movies were also released this year, but I haven’t had the opportunity to watch them. If you’ve seen one, please share your review below.

Are there any I forgot to mention?