Nevermind that we had spent the last 6 hours eviscerating each other with spears, sabers and bayonets, metaphorically speaking. Nevermind that, according to the principles of Xingyi and all other respectable combat arts, the use of purely defensive techniques is forbidden. Despite all this, in public, we were expected to present ourselves as practitioners of self-defense. Not offense. Why?

There are two explanations for this incongruity; as usual, one is popular and the other is true. We may as well start with the popular rationale: that martial arts were designed and intended for defensive purposes.

This is primarily a modern ethical assertion, disguised as a historical thesis, and consequently there is hardly any evidence to be refuted. Karate-do and Aikido, to cite two specific examples, are often represented as defensive martial arts today. Their founders’ own words reject this characterization. It is true that the arts were not to be used for starting fights; however, this is not because they were envisioned to be “defensive martial arts”, but because they were not “martial arts” at all! 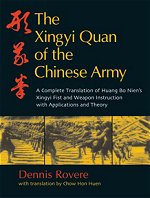 The Xingyi Quan of the
Chinese Army

In regards to modern Xingyi, nobody carries a spear around for the purposes of individual self-defense. Nor were units of the Chinese army drilled in Xingyiquan for defensive purposes—the very idea of a defensive standing army is nonsense. And the history of other martial styles is similarly revealing.

Despite all this, the myth persists, among students and teachers alike. This is because the myth itself is a defensive tactic. First, it protects those under-qualified martial arts instructors who cannot successfully execute an attack against a savvy opponent: as the story goes, their art doesn’t work for that purpose because it was not intended to work.

Second, and more importantly, it protects the arts themselves from their most dangerous adversary. Martial artists, their organizations and their arts must identify themselves as defensive (i.e. harmless) to forestall any accusation of paramilitary or revolutionary activities. Offense is the exclusive domain of the state and its contractors, and the state does not enjoy competition.

This is not some wacko conspiracy theory. At various points during the last century, martial arts schools in China, Japan, Russia, and Cambodia were targeted as potential threats to their governments. Did these schools possess tanks and fighter planes, and other weapons of modern insurgency? No. They were assumed to be guilty of something far worse: cultivating a strong and independent spirit in their membership. In some cases, these arts were outlawed and their schools shut down; in others, the teachers and students were imprisoned or otherwise removed from society.

So all things considered, I must remain a proud and completely innocent member of the International Association of Defensive Martial Arts. Would you like to join us? We have a great T-shirt.