A Review of The Forbidden Kingdom DVD 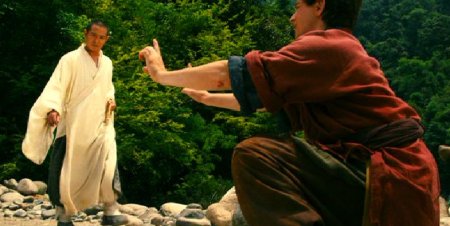 Your reaction to this single training scene, will most likely mirror your opinion of The Forbidden Kingdom as a whole.

Is Lu Yan’s instruction a tasty morsel of ancient Eastern wisdom? Or is it a sugary counterfeit, the cinematic equivalent of General Tso’s chicken? Chi ku, or “taste bitter”, is a common phrase in schools of Chinese kung fu, but let me tell you: a promise of future sweetness is never made.

I approached The Forbidden Kingdom as a longtime fan of the kung fu movie genre, and of Jackie Chan and Jet Li in particular. These two men are brilliant physical performers, and I held high expectations for their first on-screen collaboration.

While I found The Forbidden Kingdom mildly entertaining overall, the action was disappointing. This isn’t Jet or Jackie’s best work; honestly, it isn’t even their best American work.

Does this criticism seem unfair? Jackie Chan is old enough to join the AARP, after all, and Jet Li is definitely past his prime as a wushu performer. My complaint is not that they have grown older and slower, but that the choreography and editing are tailored to hide these weaknesses, instead of showcasing strengths.

Why hire top talent like Jet and Jackie, and film them like Keanu Reeves in The Matrix, relying on hidden wires and constant camera angle changes? I really don’t understand it. Where are all the long shots we have been waiting a decade to see?

By way of contrast, kungfu actors Kwan Tak-Hing and Lau Kar-Leung never failed to entertain, despite their relatively advanced age. Whatever they lacked in agility, they made up for with potency. Personally, I would love to see Jackie Chan’s creative interpretation of “old man’s kungfu”, rather than a failed attempt to recreate performances from twenty years ago.

At the end of a typical American movie, the hero vanquishes the forces of evil and gets the girl, whereas in the typical Chinese movie, the hero struggles and dies. With all due respect for our young Jason, I would have preferred a Chinese-style ending for The Forbidden Kingdom, allowing a greater focus on Li and Chan in the inevitable sequel. Forget about the white boy with the magic wand, and tell us more about the Monkey King.