Written by the apocryphal Taoist philosopher Liezi, between 400 B.C. and 300 A.D.

The Earl of Kung-yi was famous among the rulers of the states for his strength. The Duke of T’ang-hsi mentioned him to King Hsuan of Chou, who invited him to court with the highest honors. When the Earl of Kung-yi arrived, the King examined his physique and found him a puny fellow. He was puzzled and asked doubtfully:

“How strong are you?”

“Your servant is strong enough to snap the leg of a grasshopper in spring and to pierce the wing of a cicada in autumn.” 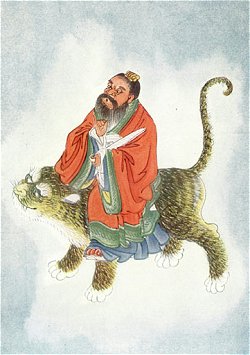 “My strong men,” said the King, looking displeased, “can rip the hide of a rhinoceros, and drag nine oxen by the tail, but it still irks me that they are too weak. How it is that you are famous for your strength throughout the world?”

The Earl of Kung-yi breathed a long sigh, withdrew from his mat, and answered:

“Your Majesty has asked an excellent question! I will venture to present you with the facts. I had a teacher named Shang-sh’iu-tzu, whose strength was unrivalled throughout the world; but his own kin did not know about it, because he never used his strength. I braved death in his service, and he told me:

What do you think is the moral of this story?