From The Legend of Master Legend: 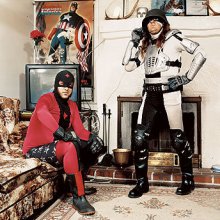 Master Legend races out the door of his secret hide-out, fires up the Battle Truck and summons his trusty sidekick. “Come on, Ace!” he yells. “Time to head into the shadows!”

The Ace appears wearing his flame-accented mask and leather vest; Master Legend is costumed in his signature silver and black regalia. “This is puncture-resistant rubber,” Master Legend says proudly, pointing at his homemade breastplate. His arms are covered with soccer shinguards that have been painted silver to match his mask. “It won’t stop a bullet,” he says, “but it will deflect knives.”

“Not that any villain’s knives have ever gotten that close!” the Ace chimes in. 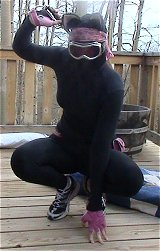 Profile: Nyx
“I am Nyx–formerly Hellcat, Felinity, and Sphynx (I had a penchant for name-changes). Like the night, I cannot be proven or disproven…”

When Master Legend bursts into a sprint, as he often does, his long, unruly hair flows behind him. His mane is also in motion when he’s behind the wheel of the Battle Truck, a 1986 Nissan pickup with a missing rear window and “ML” spray-painted on the hood. He and the Ace head off to patrol their neighborhood on the outskirts of Orlando, scanning the street for evildoers. “I don’t go looking for trouble,” Master Legend shouts above the engine. “But if you want some, you’ll get it!”

Like other real life super-heroes, Master Legend is not an orphan from a distant dying sun or the mutated product of a gamma-ray experiment gone awry. He is not an eccentric billionaire moonlighting as a crime fighter. He is, as he puts it, “just a man hellbent on battling evil.” Although Master Legend was one of the first to call himself a Real Life Superhero, in recent years a growing network of similarly homespun caped crusaders has emerged across the country. Some were inspired by 9/11. If malevolent individuals can threaten the world, the argument goes, why can’t other individuals step up to save it? 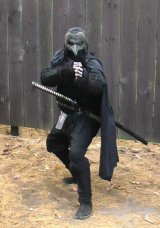 Profile: Karasu Tengu
“I am of the Ancients, and old beyond your years. Born a warrior, I have worn the uniform and performed the feats…”

Most Real Life Superheroes compensate for their lack of Adamantium skeletons or solar-fueled extraterrestrial strength by claiming extensive martial-arts abilities. Master Legend’s own personal fighting style is called “The Way of the Diamond Spirit,” which he says represents “an evolution of hand-to-hand combat.” As if to demonstrate, he sends a few jabs into the air. “One place you don’t want to be,” he says, tightening his gloved hand into a clenched fist, “is on the receiving end of the No Mercy Punch!”

Would you agree to train, or train with a Real Life Superhero as depicted above? Why, or why not?  If yes, what would you teach them?