Recognizing the growing threat of radicalization, Joe Lieberman—the Democrat-turned-independent who chairs the Senate Homeland Security and Governmental Affairs Committee—asked Google to ban videos from al-Qaeda and other Islamist terror groups.

He said the private sector also has a role in protecting the United States from terrorists. By banning these videos on YouTube, “Google will make a singularly important contribution to this important national effort,” Lieberman wrote to Google’s chairman and chief executive, Eric Schmidt, in May.

There have been online terror-training videos ranging from how to slit a victim’s throat and how to make suicide vests to how to make explosives from homemade ingredients and how to stalk people and ambush them, said Bruce Hoffman, a counterterrorism expert and professor at Georgetown University. 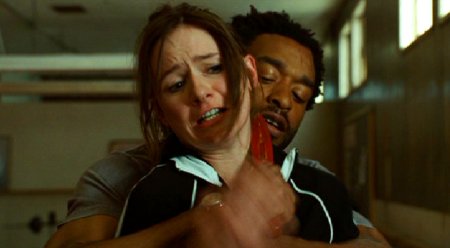 Redbelt, Sony Pictures Classics – How to slit a victim’s throat

In addition to the ban on terror training videos, the new YouTube guidelines include bans on videos that incite others to commit violent acts, videos on how to make bombs, and footage of sniper attacks.

The enhanced community guidelines identify “ninja assassin training” as a specific example of prohibited content. It is not known whether these rules apply to Sony Corporation, and other celebrated producers of violent entertainment…

By now, Affliction Vice President Tom Atencio has become used to swimming upstream against the doubters of his company. Since he launched Affliction Entertainment as the new fight promotion on the block in early 2008, he has faced naysayers at every turn, despite assembling one of the most talent-packed MMA cards in the sport’s recent history with Affliction: Banned this July.

None have been more vocal than UFC President Dana White. Since Affliction’s emergence, his not-so-affectionate moniker for the company, “the t-shirt guys,” has often been followed by a prediction of the company’s approaching demise.

“I would be (expletive) horrified if Affliction is still in business by January,” he declared.

During a recent conference call, in response to questions about various legal disputes surrounding the Couture case, the outspoken president also may have hinted that his company could take its opposition to the next level—possibly the courtroom.

Atencio told MMAWeekly.com he had no knowledge of any forthcoming litigation against his company. He does, however, believe the UFC was interfering with his ability to promote in Las Vegas, though he wouldn’t say how.

Despite a rousing debut this summer at the Honda Center, Affliction today postponed its second mixed martial arts show, scheduled for Oct. 11 at the Thomas & Mack Center in Las Vegas. No reason was given and no new date was announced.