General Sun wants coffee with a double shot of espresso. General Kalius A’dar will take a black iced tea. Cyran Oghma is all set, thanks. “Anything else, you guys?” Master Flynn asks the others assembled. As the founder of the New York Jedi, Master Flynn (no last name) knows mind tricks don’t work in Starbucks. You can’t order telepathically, and you still have to say “venti” when you really mean extra large.

On Tuesdays, Master Flynn and his Jedi posse squeeze into a few corner tables in this busy café before heading to lightsaber training at a dance studio down the street. Sessions can be grueling, starting with meditation and yoga poses before moving on to choreographed swordplay.
– Jedi Order Establishes Temple in Lower Manhattan 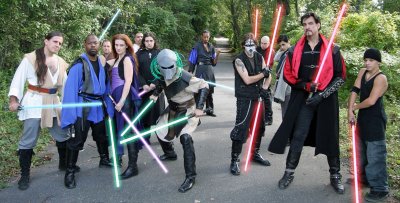 The New York Jedi are a diverse community of choreographers, martial artists, dancers, and Star Wars fanatics, dedicated to mastering the art of lightsaber combat.  In addition to holding weekly classes in sword technique and stage combat fundamentals, these Jedi frequently perform at public events, and on local and national television.

And the weapons?  Let’s just say they are not your grandma’s lightsabers… 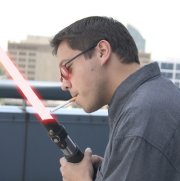 Behold, the ultimate in nerd street cred, the Excalibur of the huddled and anxious: a hand-built, custom-designed, ultradurable LED lightsaber. The polycarbonate rod lights up, the pommel-embedded speaker emits lightsaber noises, and the ornate steel hilt has a solid, satisfying, sword-like heft. And while it would look excellent encased in glass (right next to your life-size statue of the Predator), this is no museum piece…you can crash the rods together as hard you want.
– Custom Lightsabers Hold Up in Jedi Battle

Like most traditional martial arts, the New York Jedi practice both kata (solo saber forms) and bunkai (applications against a live opponent).