Who decides what this document really means? Are we each expected to launch an independent exploration into the roots of moral philosophy, considering our own values and finally identifying a set of appropriate behaviors? Preposterous.

Nobody can prove that the original authors of this document intended it as a tool for discussion, or introspection. Hence, I rightly expect guidance towards specific, concrete, measurable behaviors to be found within it. I do not find such guidance, nor any requirements that might force a misdirected adult to change their habitual conduct. I find only hollow pronouncements that the self-righteous can use to condemn others while justifying themselves.

The document contains obscure references to “Character”, “Truths”, and “Respect”—what the devil are these supposed to mean? None of us seem to agree. Perhaps this choice of words was deliberately deceptive, intended to gather the largest possible group of cult-minded followers with uncontroversial, non-falsifiable platitudes?

This document is used to rally people around good feelings, and nothing more. It is quite clearly open to abuse. For the good of humanity, take it off your wall, wad it up and throw it in the trash.

The name of this document, by the way, is the United States Declaration of Independence.

When in the course of human Events, it becomes necessary for one People to dissolve the Political Bands which have connected them with another, and to assume among the Powers of the Earth, the separate and equal Station to which the Laws of Nature and of Nature’s God entitle them, a decent Respect to the Opinions of Mankind requires that they should declare the causes which impel them to the Separation.

We hold these Truths to be self-evident, that all Men are created equal, that they are endowed by their Creator with certain unalienable Rights, that among these are Life, Liberty, and the pursuit of Happiness.

That to secure these rights, Governments are instituted among Men, deriving their just Powers from the Consent of the Governed.

That whenever any Form of Government becomes destructive of these Ends, it is the Right of the People to alter or abolish it, and to institute a new Government, laying its Foundation on such Principles, and organizing its Powers in such Form, as to them shall seem most likely to effect their Safety and Happiness.

As a scientist, a philosopher, a martial artist and a fan of individual liberty, I find the preceding argument to be remarkably inane. I didn’t make it up, though. Actually, I borrowed it from a fellow martial arts writer, who recently attempted to apply it to the Karate Dojo Kun.

The Dojo Kun are a set of guidelines for Karate practitioners, derived from the principles of Gichin Funakoshi. They are commonly translated as: 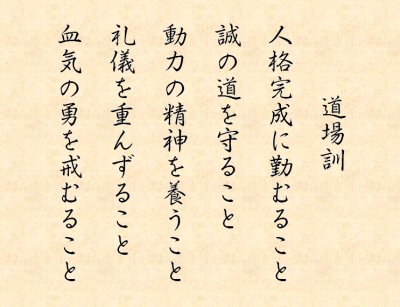 The Dojo Kun are certainly open to interpretation, and to possible abuse. If we are predisposed to reject the Dojo Kun, then this is reason enough to do so. (More on that later.) However, I propose that we should first understand the Kun—and the context in which they exist—before deciding whether to throw them away.

Unfortunately for the impatient and the uneducated, this understanding demands more than the one-sided application of “common sense”. The context of the Dojo Kun spans philosophy and ethics, cognitive linguistics, history and sociology, and other difficult subjects. The question, Do the Dojo Kun offer value?, does not lend itself to an easy answer.

I do not intend to provide that answer here. I have no great interest in defending the Dojo Kun as others use (or abuse) them; I will address a few of the groundless arguments against the Kun, only because I am interested in the reality these simplistic and reductive arguments wish to deny.

The Dojo Kun are mistranslated.
Since the time of Plato, a certain brand of sophists has imagined that words exist independently of their users. These words refer to timeless, perfected Ideas, which manifest imperfectly in our temporal world of Forms.

Plato’s ontology is a reification of words, one that conveniently separates human communication from all other forms of communication used on Earth. (Darwinism and Platonism do not play well together; exploring the nature of their incompatibility, and the motivations of their dual adherents, is left as an exercise for the reader.)

A translator who knows what words “really mean”, according to this conception, is capable of producing a “correct” translation; that is, one which perfectly captures the static meaning of the original document. The Idealist translator fancies himself a sorcerer, overpowering the forces of ontological entropy.

Whether or not one believes in Plato’s eternal world of Ideas—God’s personal dictionary—it is clear that the meaning of words does in fact change over space and time. In our world of Forms, there is no such thing as an objective communication, much less a perfect translation. According to cognitive linguist George Lakoff:

The results coming out of neuroscience and the cognitive sciences show that, far from there being “old-fashioned disembodied universal reason,” people really reason using frames, prototypes, image-schemas, and metaphors — and bring emotion into the mix as an inherent part of rationality. All of these mechanisms of thought are embodied — resulting from the nature of brain structure and neural computation on the one hand, and embodied experience on the other. They lie outside of the mechanisms of formal logic, which is the basis of the contemporary version of 17th Century rationalist thought.

Lakoff hints at the difficulties that occur between two people communicating in the same language; the Sapir–Whorf Hypothesis considers the additional complexities with cross-cultural translation.

While a few translators may still pretend to a “scientific” objectivity, modern physics and neuroscience undermine their claims. That the Dojo Kun are “mistranslated”, when measured to an impossible standard, is no reason to reject them.

The objective argument might as well be stated, Karate is not what it is—whereas the sincere desire motivating this non-argument could be expressed as I wish Karate were something other than what it is. Recall that sincerity is one of the five Dojo Kun; this complaint rejects it both explicitly and implicitly.

Yes, the values assigned to Karate practice are the values imported by its practitioners. This observation does not prove, or justify an absence of norms and standards. Nor does it entitle the least committed players to dictate proper and reasonable standards to everyone else.

Indeed, if we are interested in Karate’s potential as a personal development tool (see Dojo Kun #1), we should probably value the advice of the most dedicated and heavily invested players, over those who don the dogi once per year as a Halloween costume.

The formulation of the Dojo Kun is too intellectually demanding, or
The Dojo Kun are meant to discourage critical thinking.
To seekers of specific and foolproof guidance, these general principles pose a challenge. As with all challenges, some will rise to meet it, and others will shrink to avoid it. (See Dojo Kun #3.)

How difficult is Karate supposed to be? Are the Kun really too demanding? Maybe the kata are too easy, or our standards for assessing a skilled performer are too low? This is strictly a matter of personal values, not of disembodied reasoning.

It is more important to encourage individual excellence, or mass conformity? To the Karateka who seeks self-improvement (see Dojo Kun #5), the former is of primary concern. Whereas, one who seeks to control other people’s behavior would prefer to set the bar low, and cut down any achievers who attempt to surpass it (contrary to Kun #4).

To bind martial arts into the straightjacket of physical exercise is to set the lowest possible standard. Beware the Karate micro-manager.

The Dojo Kun are frequently abused.
Let us compose a list of things frequently misused and abused: high fructose corn syrup, human rights, “begging the question”, the American flag, Michael Bolton love ballads, et cetera. We’ll add the Dojo Kun to that list of terrors, and then destroy them all, so they can be abused no longer. Sound like a good idea? No? Why not?

Oh, I see. You think the Dojo Kun are categorically different than these other items: the Kun have no positive aspects, only negative potential. Finally, we have penetrated to the crux of the issue.

That which causes philosophers to be regarded half-distrustfully and half-mockingly, is not the oft-repeated discovery how innocent they are, but that there is not enough honest dealing with them.

They all pose as though their real opinions had been discovered and attained through the self-evolving of a cold, pure, divinely indifferent dialectic, whereas, in fact, a prejudiced proposition, which is generally their heart’s desire abstracted and refined, is defended by them with arguments sought out after the event. They are all advocates who do not wish to be regarded as such.

Every great philosophy so far has been the personal confession of its author, and a kind of involuntary and unconscious memoir.

(Friedrich Nietzsche, Beyond Good and Evil)

What is confessed by these assaults on the merit of Dojo Kun? Is it a simple case of insecurity? I have found no value within them, but that is certainly not my fault.

What should be required of a respectable defense? Is it finally anything more than, I have found their value myself?