Let’s look to the classic Tai Chi manuals of Wong Chung-yua and Wu Yu-hsiang for inspiration.

When practicing Tai Chi, doing too much is the same as doing too little.

Internally, the spirit should be controlled; externally, appear calm and comfortable.

The Tai Chi principle is as simple as this: yield yourself and follow external forces. Instead of doing this, most people ignore such obvious and simple principles and search for a more remote and impractical method.

Our ideal totem animal is not too clever, maybe even a bit lazy by nature…

In Tai Chi, being very soft and pliable leads to being extremely hard and strong.

…and can transform itself instantaneously from soft to hard, and back again…

…accomplishing these transformations through its tremendous store of potential.

A few possibilities come to mind. The mythical Qilin can walk on grass without bending the blades; similar stories were told of Tai Chi master Yang Lu-Chan. The Chinese dragon has strong potential–though it seems disinclined by temperament to employ the Tai Chi strategy of “following and extending”. 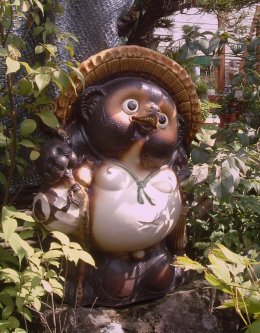 No, I think our ideal animal is the shape-shifting, hard-drinking, mischievous and strangely well-endowed Tanuki.