This contradiction is first revealed in methodology. Modern science subscribes to the notion that an experimenter should remain completely independent of the test object, thereby assuring results unaffected by the experimenter’s thoughts; otherwise, the results are considered unreliable. In other words, the subject and the object must be separate and independent. However, traditional qigong pays close attention to consciousness and to the effect of the consciousness of an object–the observer and the observed are connected.

For a significance test, it is important to have a precise understanding of the background noise. A large sample size is required for background measurement but not for the new phenomenon; a few events [of sufficient magnitude] are enough to indicate its existence.

One pleasantly cool evening in September 1987, Dr. Yan Xin came to my home. My wife (Zhu Runsheng) and I chatted while sitting around a table and drinking tea. Yan Xin said, “Can we do some further experiments to explore deeper levels of matter? I want to conduct some more difficult and extraordinary experiments.” We went into deep thought for awhile, and suddenly Zhu Runsheng said, “Can you affect the decay of an atomic nucleus?”

“Each radioactive element has its own specific half-life—the time needed for its radioactive strength to be reduced by half. For example, the half-life of 60Co used for radioactive therapy in hospitals is 5.2 years.”

“Half-life is an intrinsic property of various radioactive nuclei. It will not be affected by any ordinary physical or chemical environments. High temperature, high pressure, electrical fields, magnetic fields, acid or alkali, none of them can change the half-life. This is a basic fact of nuclear physics. Can external qi change it?”

Yan Xin was obviously attracted by this suggestion. His eyes shone and his mind was fully focused. He thought for a moment and then said excitedly, “No problem. Let’s try it.” 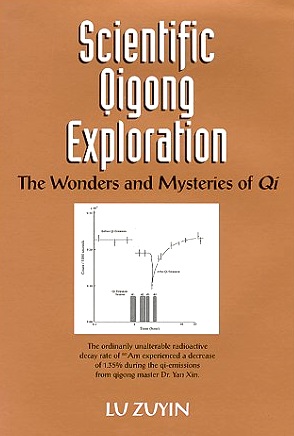 The following day, we found Associate Professor Zhang Tianbao at the Positron Physics Laboratory of the Institute of High Energy Physics. He had a high performance gamma ray spectrometer and a quality high-purity germanium detector. We selected a relatively stable radioactive source 241Am, with a half-life of 458 years…

The results of this experiment and many others, originally published in Chinese, are detailed in the book.

6 comments on “The Challenge and Promise of Scientific Qigong Research”