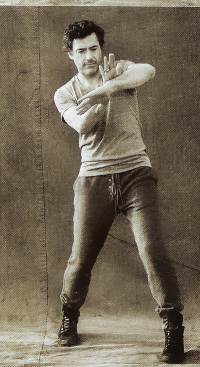 “Wing Chun is all about guarding your center line,” Downey tells me, talking about the place where the touchy-feely art of Wing Chun kung fu meets philosophy of life. “Don’t fight force with force; use to hands at the same time; concentrate on your own thing; and after you have that dialed in, effect the balance, look for openings, look for arms to be crossed.”

So that’s the secret to his newfound prosperity?

We step onto the mat. While Robert Downey Jr. has been practicing Wing Chun for almost seven years, I have been practicing Wing Chun for almost seven minutes. “Seriously, don’t worry about looking like an idiot,” he tells me. “It’s like life: The less self-conscious you are, the better it works.” He pounds on a wooden dummy, blocking with one hand and then delivering a combination to a padded face.

“Wing Chun teaches you what to concentrate on, whether you’re here or out in the world dealing with problems. It’s second nature for me now.”

“When he first came to me, insurance companies wouldn’t bond him for movies; he couldn’t get roles,” trainer and sifu Eric Oram says. “He has committed himself to Wing Chun…and turned his life around.”

Continued in the print edition of Men’s Journal.