I posed the following survey question to a group of martial artists:

What is the nicest compliment that anyone has ever paid your martial art performance? Or, if you can’t remember, then what compliment would you most like to hear?

Here are some of their answers:

The sound of tapping. ~Fraser

“For a fat guy twice my age…you left me in the dust” was the best one I ever got. ~Jerry

I get people telling me “you’re really good” all the time. Or “I always learn something rolling with you.” ~Trav

The best thing you can say to a jiu-jiteiro (in my opinion) is that he or she is ‘very technical’. This implies an understanding of the techniques and the details of the techniques that make them work. Nothing makes me feel better. ~Steve

“I thought what you were practicing was garbage…until you beat me down.” ~Chun

“I haven’t seen Lion Dancing like that since I was a child!” -said to me by an elderly man with tears in his eyes. ~Ten Tigers

After testing for shodan, my Sensei’s Sensei (who ran the test) said to me as we were leaving the post-shiai celebratory restaurant, “That was some really nice kata”. It was so simple, but coming from him it was a very large compliment. Talk about beaming! ~Karrie 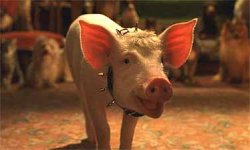 He didn’t have to say anything. Lying there and quietly bleeding seemed to capture the moment. ~Iron Weasel

What is your answer?