If you know Jackie Chan strictly from his American films—The Tuxedo, Shanghai Knights, and other assorted stinkers—then you don’t know Jackie Chan at all. To appreciate the brilliant physical ability that made him an international action hero, you need to see his earlier work. Here are a few of his best movies, from his prime years in the 80s and early 90s. 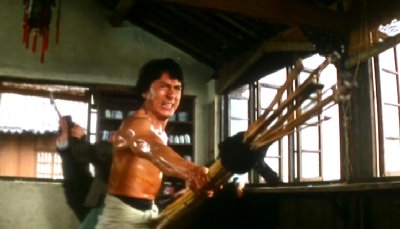 Plot summary: Roadside cooks Thomas and David (Yuen Biao) try to restore a princess-in-exile to her rightful position, with the help of a bumbling amateur detective (Sammo Hung).

Plot summary: While investigating the pollution from a mysterious chemical factory, lawyer Jackie Lung stumbles onto a narcotics syndicate. He enlists the help of two old friends to thwart the criminal enterprise.

Movie trivia: Before playing Jackie Chan’s nemesis in both Dragons Forever and Wheels on Meals, Benny Urquidez worked as a professional full-contact fighter.

Movie trivia: Although Gorgeous is a romantic comedy, Jackie’s kissing scenes were cut from the final edit. Two girls had previously attempted suicide after learning that the real Jackie Chan is married; one succeeded.

Plot summary: Detective Kevin Chan is framed for murder by a vengeful drug kingpin. He must prove his own innocence, and close the case before being arrested or killed by his fellow policemen.

Rumble in the Bronx

Which do you vote for? Are there any other must-see Jackie Chan movies you would add to this list?

(P.S. If you love kung-fu movies, don’t forget to check out my other reviews in the Video section.)