Su Dongpo occupied a government post on the northern shore of the Yangtze River. Across the river at Jinshan Temple lived the Chan master Foyin. 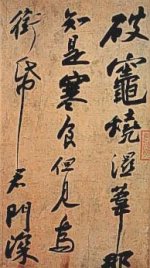 One day, Su Dongpo, feeling proud of his accomplishments in meditative practice, wrote a poem and dispatched it to Foyin for approval:

When Foyin received the poem, he read it, wrote a single word in reply, and sent it back.

Su Dongpo’s attendant returned the note. Su opened it, and found the word FART written on his enlightened poem. Enraged at such an insult, he immediately took his attendant back across the river to see Foyin.

Arriving at Jinshan Temple, Su found a note attached to the door.

Su Dongpo felt very embarrassed and returned to his practice.