Make quick, sharp, repeated jabs in these areas. Sharks are predators and will usually only follow through on an attack if they have the advantage, so making the shark unsure of its advantage in any way will increase your chances of survival. Hitting the shark simply tell it that you are not defenseless.

How to Escape From a Mountain Lion 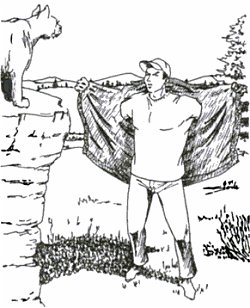 Do not run. The animal most likely will have seen and smelled you already, and running will simply cause it to pay more attention.

Try to make yourself appear bigger by opening your coat wide. The mountain lion is less likely to attack a larger animal. Wave your hands and shout.

Back away slowly or wait until the animal moves away. Do not crouch down. If the lion still behaves aggressively, throw stones.

How to Evade Killer Bees

If bees begin stinging you, do not freeze. Run away. Swatting at the bees will only make them angrier.

If no shelter is available, run through bushes or high weeds. Do not jump into the water—the bees may decide to wait until you surface, and sting you some more.

Bonus Tip: How to Box a Gorilla

Use agile footwork to dodge the gorilla’s powerful strikes. Some gorillas favor wild haymaker punches, which are easily avoided.