In the interest of full disclosure: I owe Chuck Norris a favor. It was by introducing his “facts” to the mainstream audience back in 2006, that I first established this blog as a premier source for martial arts humor, news, fact and opinion. As payback, he has kindly allowed me to review his latest book, “The Official Chuck Norris Fact Book.”

This, Chuck’s seventh book (!), juxtaposes 101 of his favorite and least obscene Internet-spawned “facts”, with real stories from his life as tournament fighter, actor, and speedboat racer. Total damage: three hundred and five pages.


Chuck Norris went to a stretching class with Steve McQueen in a pink leotard. Nobody laughed at Chuck. (pg. 39) 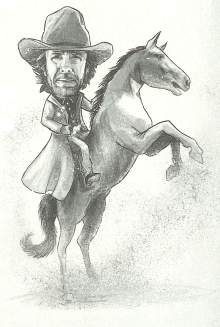 It is no coincidence that “The Official Chuck Norris Fact Book” was published by Tyndale House, also responsible for the popular Rapture-porn series “Left Behind”. While Chuck owes no apologies for celebrating his Christian values here in some rather tedious and repetitive vignettes, the party ends early for the reader. To be fair, this is one jeremiad with excellent illustrations.

It is not so much the presence of religion and politics in this book, but their shallow and humorless treatment that offends. (The 2008 gas price shock is seemingly blamed on “foreigners,” with free-market capitalism offered as a solution.) Fortunately, the book is leavened with a prominent “Chuck Norris fact” on every third or fourth page, and many of the anecdotes that stay away from these two difficult topics are genuinely interesting.

Chuck Norris once outran an angry mother elephant on the African plains. It was his favorite vacation. (pg. 263)

Those who fancy themselves as conservative soldiers in America’s “Culture War” will undoubtedly love this book. Those unfamiliar with Chuck Norris facts will also like it. For everyone else, a little Christian patience may be required.

* All the facts listed on this page are true!